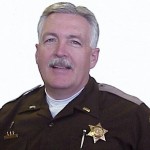 The creation of a Department of Public Safety Dive Team in latter months of 2001 was the brainchild of Lt. Mike Bergin (Ret.). His attitude was “… we are the Department of PUBLIC SAFETY … public safety in Utah includes water-related safety ….”Utah’s water itself and all underwater infrastructures are sacrosanct. Without irrigation and potable water, citizens in Utah cannot have a proper quality of life. This fact justified the creation of a rapid-response dive team with statewide jurisdiction.Lt. Bergin’s proposal was well-received by the DPS Administration and an efficient selection process for ten DPS Dive Team members soon followed. 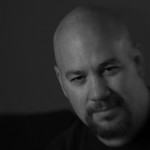 Mr. Scott Kinzie, an accomplished and highly-respected diving instructor in Utah, who is accredited by the Professional Association of Dive Instructors (PADI), provided the initial foundation-level training to the DPS Dive Team members. He set a standard of performance expectations which the Dive Team still tries to live up to.Scott’s high expectations and relentless demand for excellence produced an attitude within the Dive Team members of never settling for mediocrity … an attitude that is stilled practiced today. It is said that dedicated students attempt to imitate their teachers(s). Emulating Scott Kinzie has caused the DPS Dive Team to achieve, collectively, what could never have been achieved individually. Thank you, Scott Kinzie, your legacy of professionalism is alive and well within the DPS Dive Team. 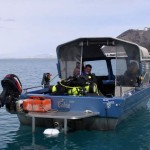 In the early days of the Dive Team, there was no DPS boat from which to dive. Often, the local agency requesting DPS Dive Team assistance had to provide a water platform, as seen here during an extended search for a drowning victim at Bear Lake. The DPS Dive Team is grateful to the State Parks Division, Wildlife Resources Division, and numerous other county agencies and private citizens who offered their watercraft to assist in a variety of deployments. 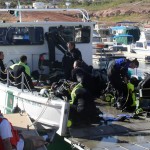 Shortly after the DPS Dive Team was created, the decision was made to create a joint-effort with the National Park Service Dive Team at Lake Powell.On several occasions in the initial years, the two Teams trained together in order to provide the optimal response to either WMD or victim search/recovery deployments around the State. This photo shows one particular training exercise that occurred in the boat harbor itself. This was the DPS Dive Team’s first exposure to oxygen-decompression procedures. 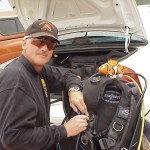 The original DPS Dive Team has been almost completely replaced with new members. Here are the original members. 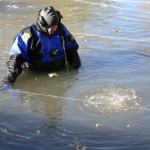 Within just over a year, the deployment requests for the DPS Dive Team exceeded the ability of the eight members to respond to. Additionally, several members moved on to other functions within the Department. Within a short time, the following were added to restore the Team to full strength. 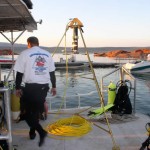 The DPS Dive Team took a huge leap forward when federal funding provided the opportunity to acquire a Kongsberg Mesotech 1000 Sector-Scan Sonar. Prior to this, Divers had to personally perform all the searches of dams or lake bottoms. This new technology allowed the increased efficieency of sonar searching instead of divers.An estimation is that this one piece of technology improved the efficiency of the Dive Team over 1000%. 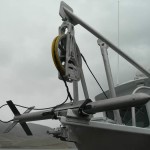 At a later date, the federal government provided the DPS Dive Team with a Side-Scan Sonar. This acquisition changed everything for baseline scans on dams and, especially, searches of large areas in lakes. The strategy of the Dive Team now evolved into using the Side-Scan Sonar to conduct initial searches, then marking the site of viable targets, then deploying the Sector-Scan Sonar to isolate the targets and also provide a down-line to the target. At the time the Side-Scan Sonar was acquired, it was the only unit of its kind in the Rocky Mountain region. 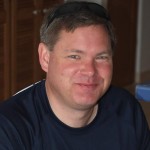 Not long after the Dive Team numbers were replenished, the DPS Administration made an important decision that has been incredibly valuable to the Team. A member of the Team would be trained to be a Dive Instructor and all fundamental training would be conducted in-house.At left is a photograph of PADI Course Jay Barth, who donated the funds necesary to educate a DPS Dive Team Instructor. The Dive Team is forever grateful to Mr. Barth for not only his kindness, but also his high degree of professionalism as he facilitated the Dive Team to become autonomous. After the training course concluded, PADI sent one of their upper administration to evaluate and certify the new DPS Dive Team Instructor. Thank you, Mr. Barth, for your involvement. 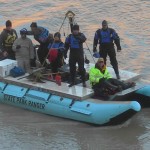 Change is inevitable. As more time passed, Dive Team members retired, resigned, or assumed other positions. The vacated positions were filled over time with the following members.

In 2008, the DPS Dive Team opted to have not only in-house basic training of its Divers, but also advanced level training. To this end, a Dive Team member became certified as a Police Diver Instructor within the worldwide diver training agency knows as Emergency Response Diving International. The Dive Team wishes to acknowledge the efforts of Mr. Sean Harrison of ERDI for his efforts to facilitate this important step. Now, the DPS Dive Team is able to conduct basic and advanced Police Diver training within its own ranks. 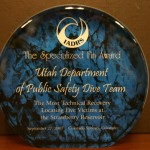 The DPS Dive Team was presented an award in 2008 by the International Association of Dive Rescue Specialists for performing the most technical recovery operation in the world in the year 2007. This was associated with the Strawberry Reservoir incident in which the Dive Team was deployed to find two drowning victims (husband & wife) and ended up finding an additional three drowning victims of unrelated incidents, the oldest occurring 11 years previous. This highly prestigious award is given to only one team in the world each year. The DPS Dive Team was highly honored to receive the award. 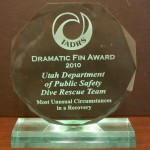 The DPS Dive Team was presented an award in 2010 by the International Association of Dive Rescue Specialists for performing in the most unusual circumstances in a recovery in the world in the year 2009. This was associated with the Lyman Lake incident in which the Dive Team was deployed to find a 55-gallon drum which was believed to contain the remains of a murder victim of seven years previous. A highly-publicized cold-case homicide was resolved via the actions of the Dive Team. This recovery is the subject of a television documentary to be presented nationwide in 2012. This highly prestigious award is given to only one team in the world each year. The DPS Dive Team was highly honored to receive the award. 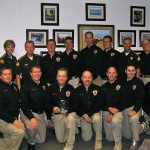 The 2012 Dive Team members are shown here with DPS Administrators (beginning at upper left to right) Commissioner Lance Davenport, Major Kathy Slagowski, Major Mike Kuehn, with Col. Danny Fuhr standing to the left of Dr. Love (upper right). This event was the celebration of a Meritorious Award given by the Department to Dr. Tommy Love. Dr. Love’s several years of selfless service to the DPS Dive Team were publicly acknowledged on this occasion. Click here to see a bio-sketch of each of the current DPS Dive Team members.